understanding sexuality and sexual identity - for family and friends

+ Save to your Spaces
If a young person has confided in you, take the time to ask them how you can support them.

The term sexuality refers to a person's sexual attractions, experiences of the attraction and sexual preferences.

There are many ways to describe sexuality (and gender). Many of these are captured by the term LGBTIQA+.

L: lesbian (someone who identifies as a woman and is attracted to other people who identify as women)

G: gay (someone who is attracted to people who identify as the same gender)

B: bisexual (someone who is attracted to people of the same gender and people of another gender. Bisexuality does not necessarily assume there are only two genders)

T: transgender or trans people (someone whose personal and gender identity is different from the one they were assigned at birth)

I: intersex (someone who is born with chromosomes, reproductive organs or genitals that don't fit the narrow medical or social expectations for what it means to have a male or female body)

Q: queer (this term has many different meanings, but it has been reclaimed by many as a proud term to describe sexuality or gender that is anything other than cisgender and/or heterosexual)

A: asexual (someone who has low or no sexual attraction to any gender, but may have a romantic attraction towards another person)

+: (this acknowledges there are many other diverse sexual orientations and gender identities).

While they are sometimes talked about together, sexual identity is different to gender identity.

If a young person lets you know that they identify with a diverse sexuality you are being trusted with very private and personal information. They may have never talked to anyone about this before, or they may have only just begun to understand and feel comfortable with their sexuality. They trust that you will support and accept them – they have ‘invited you in’.

If a young person has confided in you, take the time to ask them how you can support them. Reassure them that you will respect their privacy and ask their permission before sharing their information with anyone else. They may not be comfortable to let other people know about their sexuality as yet, and it is very important that they remain in control of their personal information.

There are a range of stressful experiences that may increase the risk of depression, anxiety, self harm and suicide for sexuality diverse young people. Some common experiences that can affect the wellbeing of a young person include: 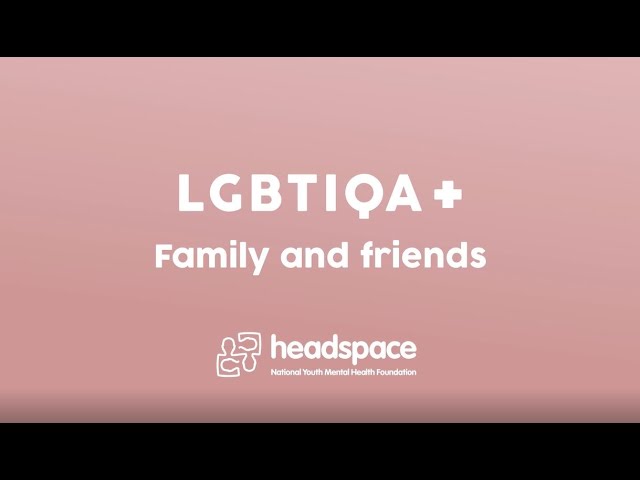 These pressures can be very stressful, especially when combined with all the other issues associated with growing up, such as managing school or university, finding a job, forming relationships and making sense of their identity and place in the world.

Things to look out for in the young person include:

It's normal to experience some of these changes from time to time. When these changes last longer than expected and begin to interfere with a young person's life, their study, work and friendships, it’s a good idea to talk to them about seeking help. A good place to start is their general practitioner (GP), their local headspace centre or eheadspace (online or by phone).

The role of family and friends

Families can have a major impact on the wellbeing of sexuality diverse young people. Young people who come from families that fully support their sexuality have better overall health, mental health, higher self-esteem, and are more likely to believe they will have a good life as an adult. Every bit of support can make a difference to your young person's risk of suicide, general and mental health, and substance use concerns.

Sexuality diverse young people that experience conflict with, or rejection by, their families and loved ones are at higher risk of developing depression and anxiety. They are also more at risk of homelessness, economic instability, self harm and suicide, substance abuse and sexually transmitted infections.

How to support a young person with a diverse sexuality

Parents and carers of young people often neglect their own needs because they are busy looking after others, or because they feel guilty taking time for themselves. It’s important that, while you take care of someone, you also look after your own mental health. Check out our tips on self care for family and friends, talk to someone you trust, or seek professional help.

For more information or support, to find your nearest headspace centre or for online and telephone support, visit eheadspace.

The headspace Clinical Reference Group oversee and approve clinical resources made available on this website. Transgender Victoria contributed to an earlier edition of this page.

Gender identity is generally developed very early in life. It's about how you experience or perceive your gender, how you show this to others, and how you want others to treat you.

how to support a family member

When someone in your family has a mental health problem